Text and Photos by Michael Tashji

On a Friday night in Bloomfield, N.J., middle school children hang out at Foley Field to watch the highschool football team play.

Officer Marvid Camacho provides security at the game. As the resource officer at Bloomfield Middle School, he knows all the kids in town. He handles any incidents involving minors.

After a fistfight broke out between two middle school brothers, Camacho responded, broke up the fight and told the boys to go home.

But the younger brother continued to fight, even getting physically aggressive with another officer, shoving and cursing at him.

Bloomfield Police arrested the seventh-grader and brought him to the station. “The last thing we want to do — especially at this age — we don’t want to file charges against kids,” said Camacho.

Instead, he offered the child an arrangement that was much more lenient, including community service and a written apology.

Camacho is a new breed of cop. His role, as he sees it, is to prevent crimes, not just respond to them afterword. He tries to build a connection with kids and give them life lessons that will keep them out of the criminal justice system.

He and his fellow officers, Detectives Paul Charles and James Romano, work with juveniles in Bloomfield. Policing kids today is different — the ‘”tough on crime'” days are over. Public scrutiny of police is at an all-time high, five years after the unrest in Ferguson, MO. And while they’ve adapted to these changes, they’ve also banded even closer together to support each other.

Bloomfield is a small town — a little over 5 square miles — and just 19 miles from New York City. The mostly middle-class town’s demographics are similar to the nation’s: 60% white, 18% black, 8% Asian, 10% other races
and nearly 4% from two or more races. Those identified as Hispanic or Latino make up 25% of the town’s population.

Camacho, 38, grew up in Bloomfield and attended the middle school where he works now. He lives with his parents and three sons in the same house he lived in as a child.

He joined the police force in 2013, after working in a juvenile detention center.

Camacho’s job is to patrol the school halls and grounds and provide security for the nearly 1,000 seventh- and eighth-graders. He also runs the school’s D.A.R.E. program designed to keep kids off drugs.

Alla Vayda-Manzo, principal of Bloomfield Middle School, sees his ability to connect with kids every day.

“He has nicknames. He asks questions about their life,” said Vayda-Manzo. “He is putting a friendly face to a police officer. To build that relationship — when the kids get older — to understand that the police are here for the community.”

If there were ever an active shooter on campus, Camacho would be the first line of defense. He always carries a sidearm and two radios — one for the police department and one for the school.

He’s never had to contend with an active shooter at school. But still, he helps lead a lock-down drill once a month.

Growing up in Bloomfield, Camacho had a safe, suburban life. His job on the police force, he said, gives him the chance to ensure the kids in his community today have that same opportunity.

As a detective, he examines evidence — video surveillance, witness testimony and statements from victims — and then brings suspects into the station to be interviewed.

Charles has had to handle some pretty tough cases, including apprehending a pedophile in the park molesting a child. Charles has drawn his gun in the line of duty but has never fired it. He’s learned the art — and science — of conducting an interview. He never lets on that he’s caught someone in a lie — he just revisits the same question over and over again.

“The greatest tool for solving crimes is the human conscience,” said Charles. “You’d be amazed how often people confess.”

Charles, 50, lives in Hawthorne, N.J., with his wife Kelly. The two dated in high school, and have been together ever since. Their three sons are grown and no longer live at home.

Before making detective, Charles was the school resource officer at Bloomfield High School for 11 years. He still has the key to the school. On weekends, he goes back there to play basketball with his friends — many of them cops.

He also loves to watch football. When the sports bars he frequented became too expensive, he set up one of his own in his basement. Four TVs play simultaneously, and there’s always food and plenty to drink.

Romano and Camacho often swing by. But they never talk about work. Instead, they try to forget about policing for a while.

Romano spent four years in the Air Force and was at the airbase in Khobar Towers, Saudi Arabia, when terrorists attacked in 1996. He has a tattoo on his left arm to commemorate the 20 men that died that day. It says Never To Be Forgotten.

I first met Romano when he was 7 years old. His family moved into a house at the end of my street. Before reporting this story, the last time I’d seen him was nine years ago — at his father’s funeral.

Romano, 44, now lives in Pompton Lakes, N.J., with his wife, Vanessa, and their two kids. He joined the Bloomfield Police Department in 2006 starting as a patrolman and working a night shift for nine years.

In 2014, he became a juvenile detective, investigating crimes committed by or against kids. Having kids of his own, he said it’s tough to keep composed when he’s interviewing a suspect charged with the sexual assault of a minor.

Romano leads Bloomfield’s anti-cyberbullying efforts, aimed at protecting middle school children. In the summer, he, Camacho and others host the Junior Police Academy, a four-week program that teaches kids discipline, physical fitness and police training. He also coaches football for the town’s junior league — along with his son Matthew, 18. As both a cop and a coach, everybody in town knows him.

Romano says the best thing about being a police officer is helping people when they’ve been victimized. Years later, they’ll come up to him and give him a hug and say thanks.

Policing today requires many skills — some hard, some soft.

“So many hats,” said Romano. “Social worker, big brother, big sister. And, really, the last resort is being a cop.”

Michael Tashji a creative director turned content creator and journalist. He writes
stories and takes photographs aimed at advancing social justice in his
community and around the world.

He began photographing as a teenager and learned to develop film and print in
a darkroom. As a designer, he learned how to edit and present work, creating 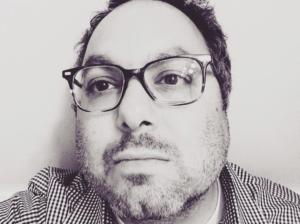 photography books and overseeing their production. Now as a journalist, he’s
learning how to use the camera as a tool for reporting.