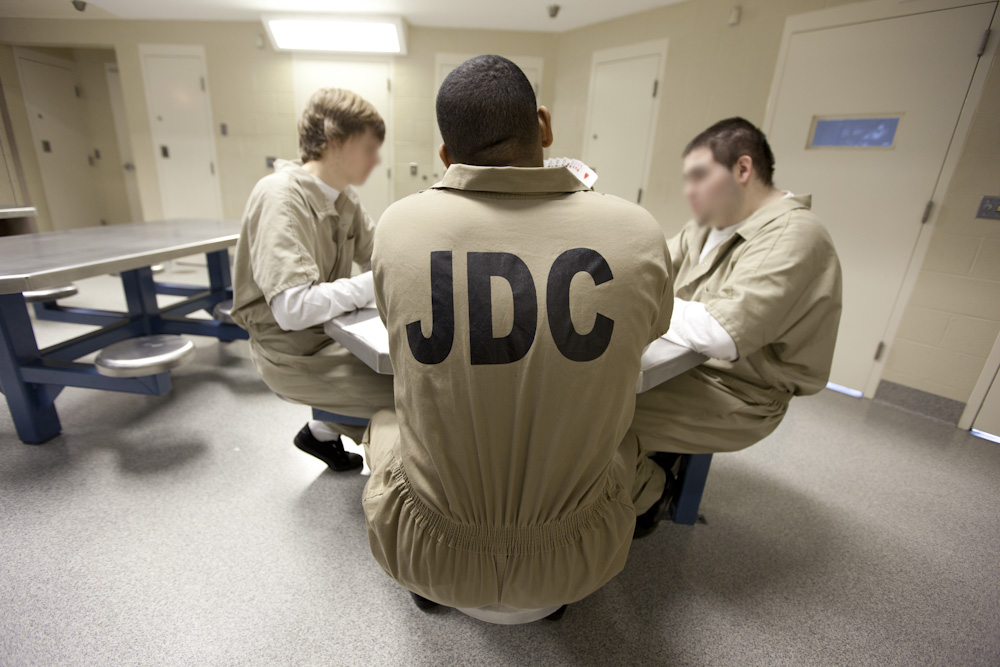 [two_third] I’m from Wyandotte, Kansas. I’m a “brother” of D.F. We both been here for a while. We are probably going to the same place, a YCAT for a couple of years. This is the 10th time I’m here. I started coming in when I was 11. First time—I don’t really remember … I think it was a fight at school. Couple of times for fighting — aggression stuff. I have been in foster homes. Had trouble at school. One time at school I almost fought a security guard. Mom is from Mexico and my Dad is black. The state took me away from my Mom when I was 10. She was smoking heavily. I was smoking with my Mom when I was 5. It was the first time she let me hit it. She was into a lot of stuff. She has done PCP and heroine. When she had me she was 15— my age probably … She was 14 when she got pregnant with me. They put me in a foster home with my two sisters. Then they put me in an adoptive home. They were a good family but I probably messed that up. My mom probably knew I was doing stuff. I know ways around a pee test. You can put in a capful of bleach or a dot of bleach in a small sample. I took a switch-blade to middle school to protect myself from other kids. I’ve been to Marillac [a mental health care facility for children], Critindon, then TLC long-term for four months –- A residential care facility for behavior stuff.

I caught a felony on a JCO (Juvenile Correction Officer) Christmas 2012. I said I was going to fight some kid. Said I was going to kill myself. A JCO opened the door and tried to restrain me. I kicked him in the chest…intentionally. He is kind of hard but he is sort of not. He tried to say that I broke some chick’s wrist … A CO… but I didn’t. I’m a sophomore … I like school. I get good grades when I am paying attention. I didn’t pay attention cause it’s kind of boring. Police would describe me as “gang member.” I’m back in foster care now. I’ve been in placement all around Kansas. I’ll probably be at a foster home cause I got no place to go. My adopted mom and dad moved to Virginia. My adopted aunts and uncles and grandparents visit me. I got a visit today from my aunt and grandpa. I’m not destined for institutional life. If I was to get out of here—and I have to think about what I think is right and what they (the institution—like police) thinks is right … I am going to react to what I think is right and I will probably be right back in here. Like if I’m on the outs and someone is talking trash or shit to me, I’ll fight them. I don’t think being in here is that bad … It’s sort of like day care. I don’t have anywhere to go to call home … so no big deal. During the evening shift me and E.K. manipulate the pod and the JCOs. We decide what we are going to do if we get mad. We strike fear into the hearts of the boys in blue — actually, black. I’m probably going to do 36 months at YCAT.

I’m not destined for institutional life.

Juvenile In Justice is a Guggenheim award winning project by world renowned photographer Richard Ross to photograph and interview youth in juvenile detention centers across the U.S.Installments from the project appear weekly on Bokeh.
[/two_third] [one_third_last]

See more from Juvenile In Justice on Bokeh: