Rusty Miller explored 1960s Atlanta with a camera and documented parts of everyday life in the community. The vivid pictures told stories of quality of life, togetherness and perhaps even the distractions from life’s chaos. Essentially, these pictures document the easily forgettable moments that show the past of Atlanta and its people. Despite the hundreds of photos documenting the expansion of the city, the construction of roads and the historic moments of Atlanta’s development, only a couple dozen photos of old Atlanta exist showing it through Miller’s lens.

Atlanta’s culture, history and people are the vital organs in the changing landscape. These factors have given Atlanta its reputation as a soulful, tough, unique community. The ability to bounce back and push forward in the name of your family, friends and neighbors is what gives Atlanta such grit. What were the events that they bounced back from? Fighting segregation, protesting for civil rights and fighting for economic security. The ability to focus on these features of Atlanta’s community allows us to better understand their resilience in the face of adversity over time. However, focusing solely on Atlanta’s residents and the idea of their soul led to a forgotten history of the city. While reaching for equality no one was focusing on documenting the surrounding predominantly black community: No one except for Miller.

Atlanta is unrecognizable from what appears in Miller’s pictures and the people in the pictures equally unidentifiable. The clear view of the city now surrounded by dozens of new skyscrapers, luxury apartment buildings and high rises. Historic neighborhoods are gone, communities are torn down and people are displaced as victims of Atlanta’s need for progress. Atlanta presses forward with even bigger changes, giant stadiums and an influx of people for the growing economy, making preserving Atlanta’s history with Miller’s pictures even more important.

Bob Prillaman is a man who has seen overseen change and development in his community throughout the decades. Noticing the evolution of his town and city throughout his life emphasizes the need for documenting the story of an area.

If you have a particular area that you know is gonna be transformed, it is important to go out and talk to the people now, document the before, the transition, and the after. The effort just needs to be made,” Prillaman said.

It’s imperative to make sure that the next urban renewal site doesn’t just extinguish the story of a community.

The digital age offers many tools that facilitate documentation, research and communication between communities. However, when it comes to the uniqueness of these images and what they portray, the internet can be misleading, untruthful or full of faded memories, specifically on social media. Many people post photos and reminisce over where the picture was taken, if they ever passed by the area, the activities that took place there. In the same way that anyone can use the internet, anyone can mistake a location, a story or an event and post about it. These challenges of time make it hard to track down sites with any certainty.

The events happened over 60 years ago, people that you’re talking to might not have many memories. To find eyewitness accounts you’re gonna have to be talking to people 70, 80 or 90 years old,” said Prillaman.

Google Maps brought hope for identification through the use of Google’s 3D modeling of Atlanta to possibly identify and match skyscrapers, train lines and hills in the pictures to their modern counterparts. Although this helped identify the location of one picture, the task was too much. While each picture contains small identifiers hidden throughout, including a train on top of a hill, trolley lines, numbers on a house, highway construction and skyscraper positioning, attempts to place the photos feels like putting a puzzle piece where it belongs only to discover problems with the other pieces.

“Progress makes it hard to keep up with the past, sometimes erasing it,” said Prillaman.

Other resources around Atlanta such as the Kenan Research Center, Apex Museum and the Atlanta historical society houses hundreds of photographs from around the same time. Despite the abundance of information and documentation that these museums offer with all their images, matching Miller’s pictures still proved elusive. With all the “urban renewal” projects that have taken place over the past 60 years, placing the small number of context clues given became an insurmountable challenge. The architecture of the buildings, the sloping hills, the skyscrapers, the railroads, the empty lots may tell us about the general area where the photo was taken but not the story behind it.

Rusty Miller embodies the notion of hanging on to history.

Despite the failure experienced on this makeshift scavenger hunt, the journey to find answers still told the story of Atlanta’s forgotten communities. It’s a story of the tragedy of displacement, destruction and costly renewal in underserved communities.

The lesson behind Miller’s images is that everyone has a responsibility to help record history. 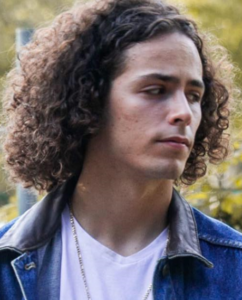 Juan Pablo Ocampo is a communication major at Kennesaw State University. A native of Columbia, he has called Marietta, GA., home for the last 20 years. Currently enrolled in his third year, he has worked closely with the university’s newspaper, the Sentinel, as a photographer.